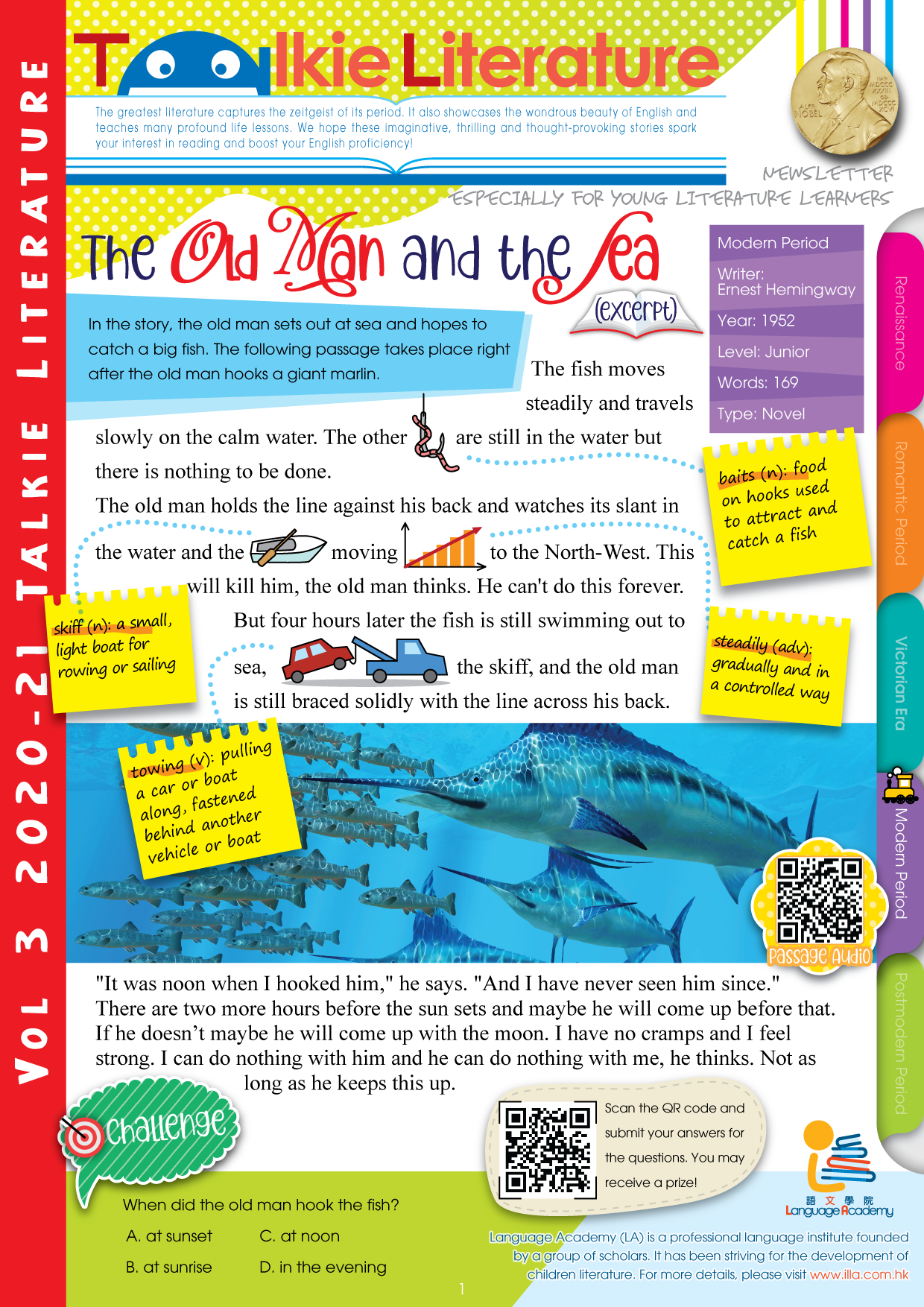 The fish moves steadily and travels slowly on the calm water. The other baits are still in the water but there is nothing to be done.

The old man holds the line against his back and watches its slant in the water and the skiff moving steadily to the North-West. This will kill him, the old man thinks. He can't do this forever. But four hours later the fish is still swimming out to sea, towing the skiff, and the old man is still braced solidly with the line across his back.

“It was noon when I hooked him,” he says. “And I have never seen him since.” 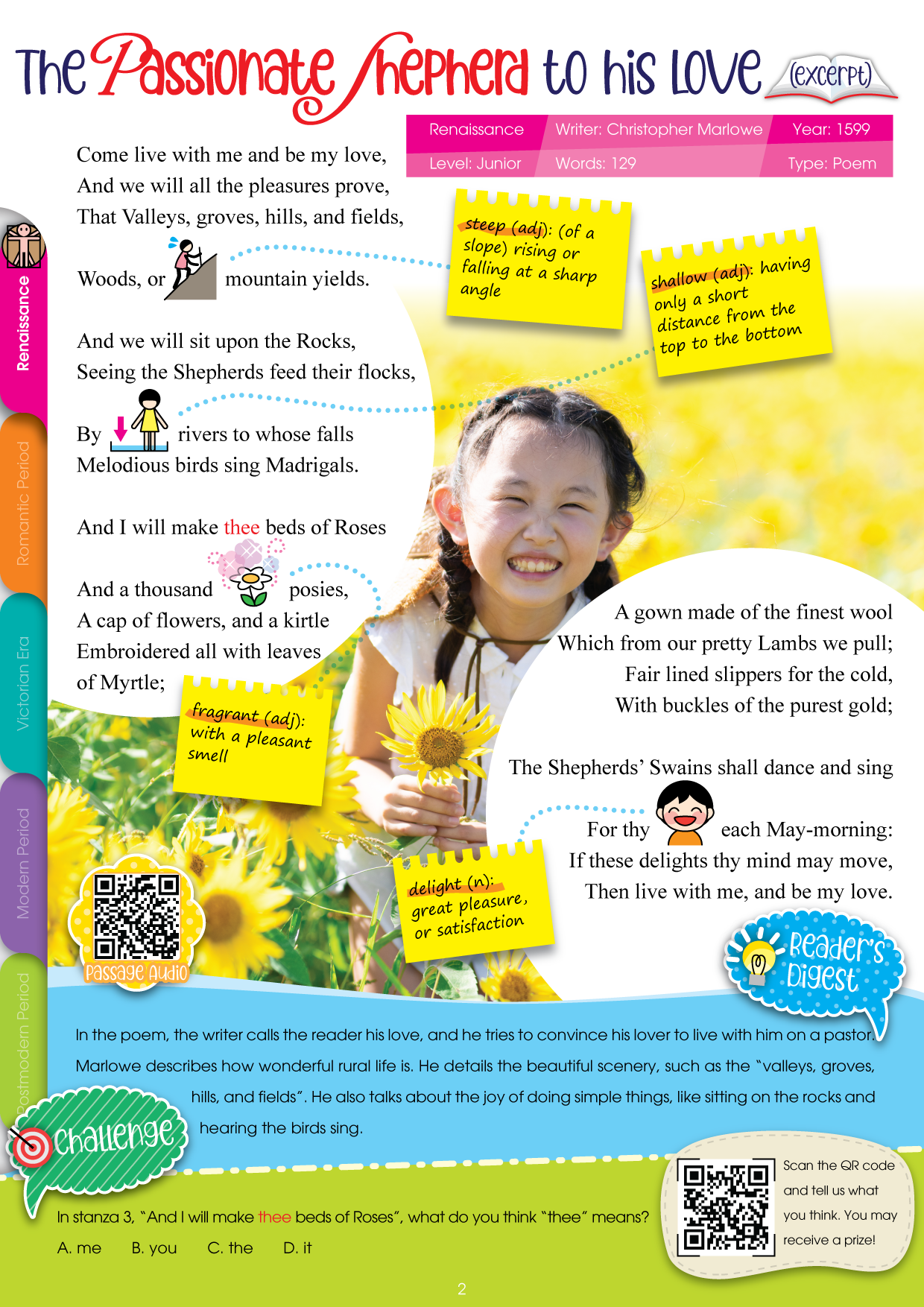 Come live with me and be my love,
And we will all the pleasures prove,
That Valleys, groves, hills, and fields,
Woods, or steep mountain yields.

And we will sit upon the Rocks,
Seeing the Shepherds feed their flocks,
By shallow Rivers to whose falls
Melodious birds sing Madrigals.

And I will make thee beds of Roses
And a thousand fragrant posies,
A cap of flowers, and a kirtle
Embroidered all with leaves of Myrtle;

A gown made of the finest wool
Which from our pretty Lambs we pull;
Fair lined slippers for the cold,
With buckles of the purest gold;

The Shepherds’ Swains shall dance and sing
For thy delight each May-morning:
If these delights thy mind may move,
Then live with me, and be my love. 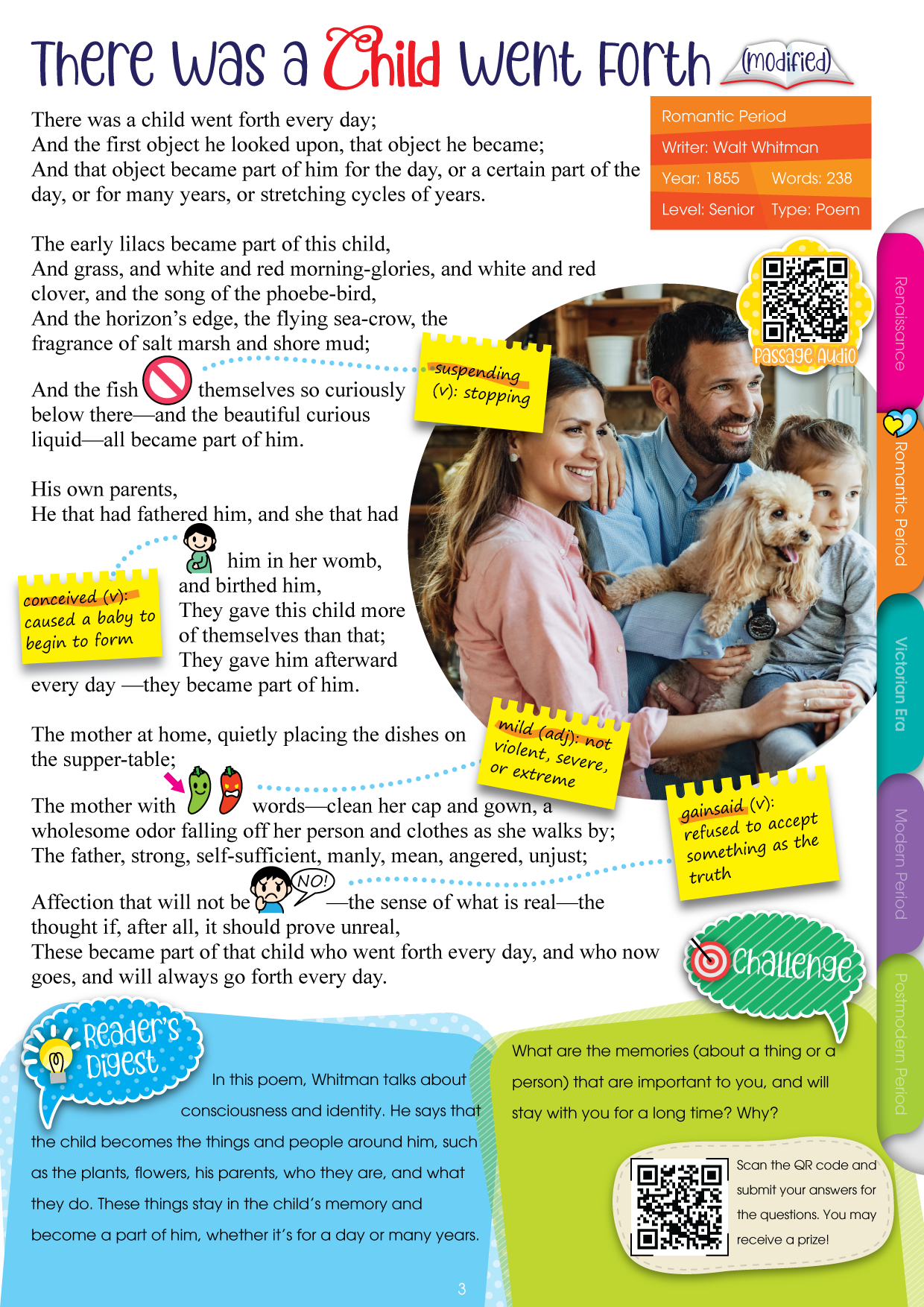 His own parents,
He that had fathered him, and she that had conceived him in her womb, and birthed him,
They gave this child more of themselves than that;
They gave him afterward every day—they became part of him.

The mother at home, quietly placing the dishes on the supper-table;
The mother with mild words—clean her cap and gown, a wholesome odor falling off her person and clothes as she walks by;
The father, strong, self-sufficient, manly, mean, angered, unjust;
Affection that will not be gainsaid—the sense of what is real—the thought if, after all, it should prove unreal,
These became part of that child who went forth every day, and who now goes, and will always go forth every day. 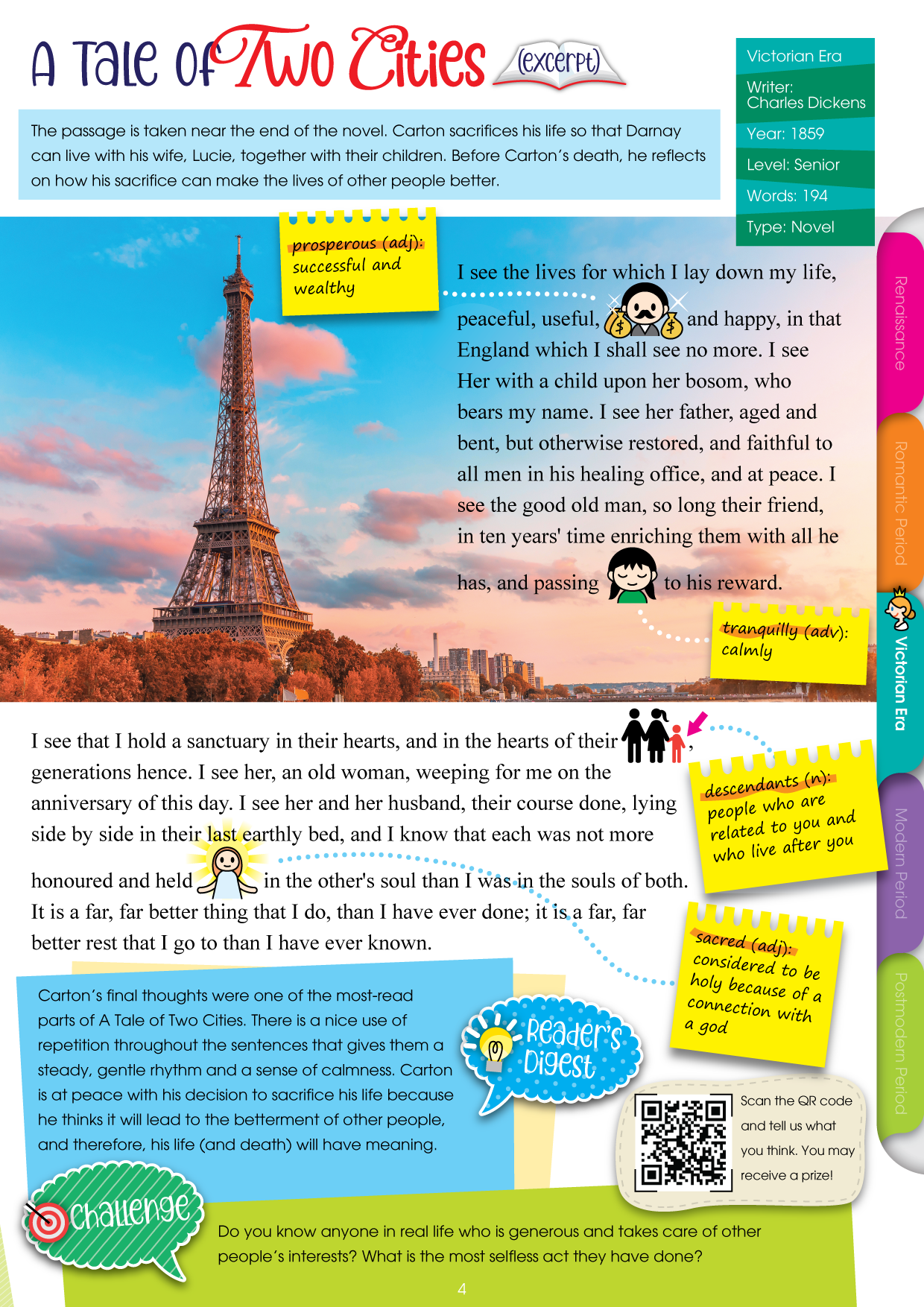 I see the lives for which I lay down my life, peaceful, useful, prosperous and happy, in that England which I shall see no more. I see Her with a child upon her bosom, who bears my name. I see her father, aged and bent, but otherwise restored, and faithful to all men in his healing office, and at peace. I see the good old man, so long their friend, in ten years' time enriching them with all he has, and passing tranquilly to his reward.

I see that I hold a sanctuary in their hearts, and in the hearts of their descendants, generations hence. I see her, an old woman, weeping for me on the anniversary of this day. I see her and her husband, their course done, lying side by side in their last earthly bed, and I know that each was not more honoured and held sacred in the other's soul than I was in the souls of both. 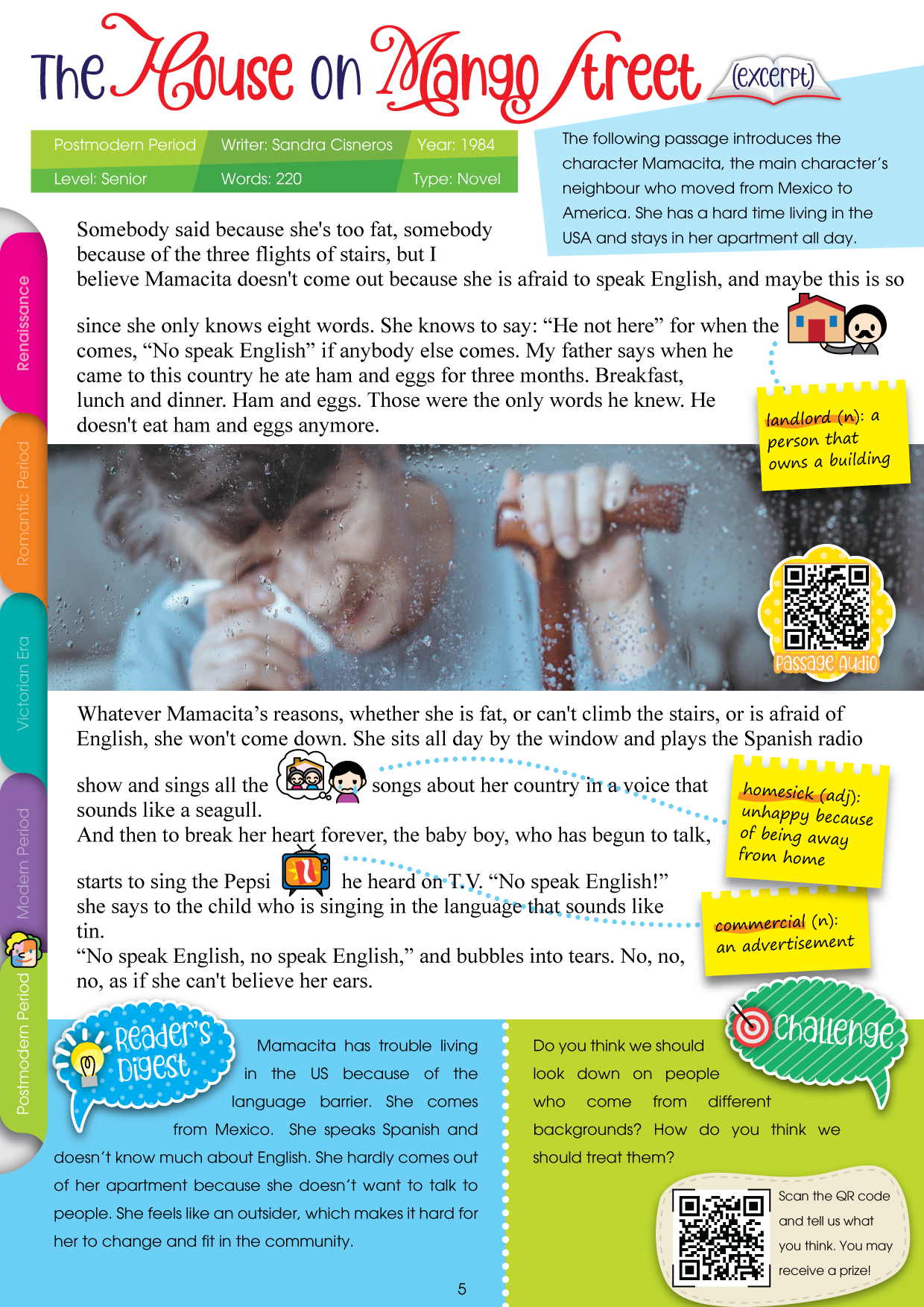 Somebody said because she's too fat, somebody because of the three flights of stairs, but I believe Mamacita doesn't come out because she is afraid to speak English, and maybe this is so since she only knows eight words. She knows to say: “He not here” for when the landlord comes, “No speak English” if anybody else comes. My father says when he came to this country he ate ham and eggs for three months. Breakfast, lunch and dinner. Ham and eggs. Those were the only words he knew. He doesn't eat ham and eggs anymore.

Whatever Mamacita’s reasons, whether she is fat, or can't climb the stairs, or is afraid of English, she won't come down. She sits all day by the window and plays the Spanish radio show and sings all the homesick songs about her country in a voice that sounds like a seagull.

And then to break her heart forever, the baby boy, who has begun to talk, starts to sing the Pepsi commercial he heard on T.V. “No speak English!” she says to the child who is singing in the language that sounds like tin.